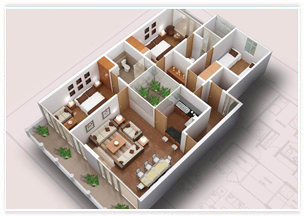 2011 Promises High Growth for 3D Modeling Market
Beginning 2011 the 3D modeling market is expected to grow to a new high after a decline during the 2008-09 global recession and nearly a no-growth period of 2010. As the economies around the world come out of recession, significant opportunities for the 3D modeling can be seen in the increasing popularity and demand for 3D movies, and growing interest in the gaming industry.

Opportunities for 3D Modeling
Digital games in general and 3D games in particular are the emerging trend in the gaming industry. 3D modeling and animation software are in great demand in this industry. Geographically, India has not only emerged as the most sought after destination for outsourcing the 3D modeling jobs (with an estimated 30% growth per annum) but is also a huge market for 3D animation movies.

The future of 3D Modeling
The most important challenge for the 3D industry is going to be a photorealistic animation of human beings. The 3D modelers will need to come out of their comfort zone of generating human cartoons, animals and fantasy characters, and machines to create computer generated humans that will look and act like humans. The “Holy Grail” of the 3D modeling industry is the creation of a movie scene where it will be close to impossible to tell the difference between the computer-generated movie scene and the real-life acted movie scene including the physical motions, the natural landscape and interaction with the other characters.

The 3D modeling and computer animation is surely back in business after a couple of years of layoffs with the opening up of new geographies and industrial sectors and introduction of innovative software and technologies.